You are here: Home » Case Studies 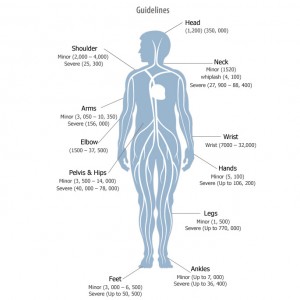 Mrs B from Stockport sustained injuries to her left wrist and left shoulder following an accident when she fell over an uneven section of the footpath.

We recovered £11,000 in personal injury compensation for her, which included an award in respect of domestic assistance required by her, and the cost of new furniture to assist her around her home following the accident.

Mrs D was involved in a road traffic accident in which she sustained a neck injury. The neck injury required operative treatment, and she was away from work following an operation to her neck. We recovered a total of £32,000 in road accident compensation for Mrs D, which included damages for personal injury, care received, loss of earnings and operation costs.

Mrs X suffered a tearing injury whilst undergoing a beauty wax treatment. She suffered a laceration and psychological trauma for which counselling was recommended. She received £3,000 in settlement of her personal injury claim.

Mr B was using a drill at work when the drill bit snapped and speared our client in his eye. We managed to successfully secure a full return to work for our client despite his injuries and also recovered him £120,000 eye injury compensation after much negotiations. The defendants also argued that our client’s damages should be deducted for allegedly contributing to his accident. We fought for Mr B so he secured 100% of the damages to which he was entitled. His award included an award for pain, suffering and loss of amenity, past loss of earnings until he could return to work, care and assistance provided by friend and family and the client’s disadvantage on the labour market due to his injury. No stone was left unturned for Mr B – we even recovered the costs of attending a driver’s rehabilitation course.

Mr H worked at the airport, unloading baggage from an aircraft when his foot got caught in loose netting causing him to fall from down to the ground and sustain an injury to his shoulder. The defendants again tried to reduce the client’s damages by 20% but we fought to secure Mr H a settlement on a full basis. Mr H returned to work following surgery on a part time basis and we secured his continued loss of earnings for life so he did not suffer financially through working part time. We secured a settlement for Mr H in the sum of £133,000.

Mr D was outside his flat when he fell down a manhole cover. The Council denied they were to blame for Mr D’s accident. We fought for Mr D despite their continued denial all the way until the Council paid Mr D his full dues in compensation. Mr D recovered £5,000 in injury compensation from the council for 18 months symptoms to his neck and shoulder and was over the moon with his victory after such a strongly fought campaign.

Miss B sustained a needle stick injury when she was pricked by a one whist working at a hospital. After an offer of £1,000 for her pain and suffering (Miss B had no other losses), Nicki Simmons negotiated an increase to £5,000 settlement in her clients hand. Miss B was over the moon as she had another incident in identical circumstances with a different firm of solicitors for which she recovered far less needle stick injury compensation. She said ‘Thank you very much to Nicki Simmons for your help and very hard work’

Mr N was walking down metal steps at work and slipped on oil sustaining injury and fracturing wrist. We secured a settlement for £110,000.

While Mr S was lifting heavy rolls of adhesive tape at work, he sustained a back injury. We secured a settlement for £55,000 in back injury compensation.

Knee Injury Compensation Case Studies – Mr T suffered an ankle and knee injury in a motorcycling accident and was unable to return to his former work as a Baker’s assistant. Mr T recovered £395,000 in motorcycle injury compensation.

Miss H was dissatisfied with the way her previous solicitors were conducting her road traffic accident claim. She was being urged, against her will, to accept a 50/50 settlement because she had no witnesses to support her version of the accident. She came to us for a second opinion. We believed in her, took her claim on, issued Court proceedings and secured a 100% settlement for her. She recovered all her losses, damages for a whiplash injury, full costs, and her full ‘no claims bonus’ was preserved.

Master B was aged 17 when he had an accident at school – the premises had been changed – new windows had been fitted to a building, but they opened dangerously near to a play area where he was playing football. He ran into a corner of an open window frame, sustaining a nasty cut and scar to his forehead, knocking himself out in the process.

His mum complained to the school; to the governors and to her L.E.A., looking only for an apology, and confirmation that the windows would be altered, so as to open safely. All her complaints fell on ‘deaf ears’ and she came to us for help. By the time Master B became Mr B (1 year – when he was 18!) we had obtained an admission of liability, the windows had been changed, and he was able to celebrate with a handsome 5 figure sum for damages for his pain and suffering.

Alternatively, you can fill in our quick contact form mentioning any questions you have and we can get back to you as soon as possible.

We haven't written any blog posts about Case Studies yet.

Click here to to go to the main blog and read our latest blog posts.